Probably More Than You Wanted to Know about Rattlesnake Venom: Purpose, Chemical Composition and Effects on the Body

Feb 28 Posted by Guest in Knowledge

An anonymous letter to The Pennsylvania Journal in December 1775 describes how the writer observed an image of a rattlesnake depicted on a drum belonging to a Marine with the words ‘Don’t Tread on Me’ spelled underneath the snake’s image.  The writer went on to theorize as to why this symbol was chosen by the Marine and its intended meaning.  The writer began by outlining the characteristics that distinguish rattlesnakes from other animals and supposed why these same properties may be appropriately used to symbolize the United States of America:

“I recollected that her eye excelled in brightness, that of any other animal, and that she has no eye-lids.  She may therefore be esteemed an emblem of vigilance.  She never begins an attack, nor, when once engaged, ever surrenders: she is therefore an emblem of magnanimity and true courage.  As if anxious to prevent all pretensions of quarreling with her, the weapons with which nature has burnished her, she conceals, in the roof of her mouth, so that, to those who are unacquainted with her, she appears to be a most defenseless animal; and even when those weapons are shown and extended for her defense, they appear weak and contemptible; but their wounds however small, are decisive and fatal.  Conscious of this, she never wounds ‘till she has generously given notice, even to her enemy, and cautioned him against the danger of treading on her.

Although the above paragraph was written anonymously, history scholars believe the writer to have been Benjamin Franklin.  The entire letter can be viewed at http://greatseal.com/symbols/rattlesnake.html.

This short blog will consider the venom attributes of rattlesnakes.

What is the Purpose of Rattlesnake Venom?

There are two main categories of venoms: those that are intended to subdue prey and those that are intended to dissuade predators.  Rattlesnakes evolved their venom to subdue prey and to begin the process of digestion.  Figure 1 shows a timber rattlesnake (Crotalus horridus) in the act of consuming an eastern gray squirrel (Sciurus carolinensis) after subduing it with venom.  They have a special suite of proteins and enzymes to help accomplish this task.  Unfortunately, although rattlesnakes evolved their venom for use in obtaining food rather than as a defensive measure, a defensive bite nonetheless has the effect of these digestive compounds tearing through bodily tissues and causing pain, swelling, and necrosis. 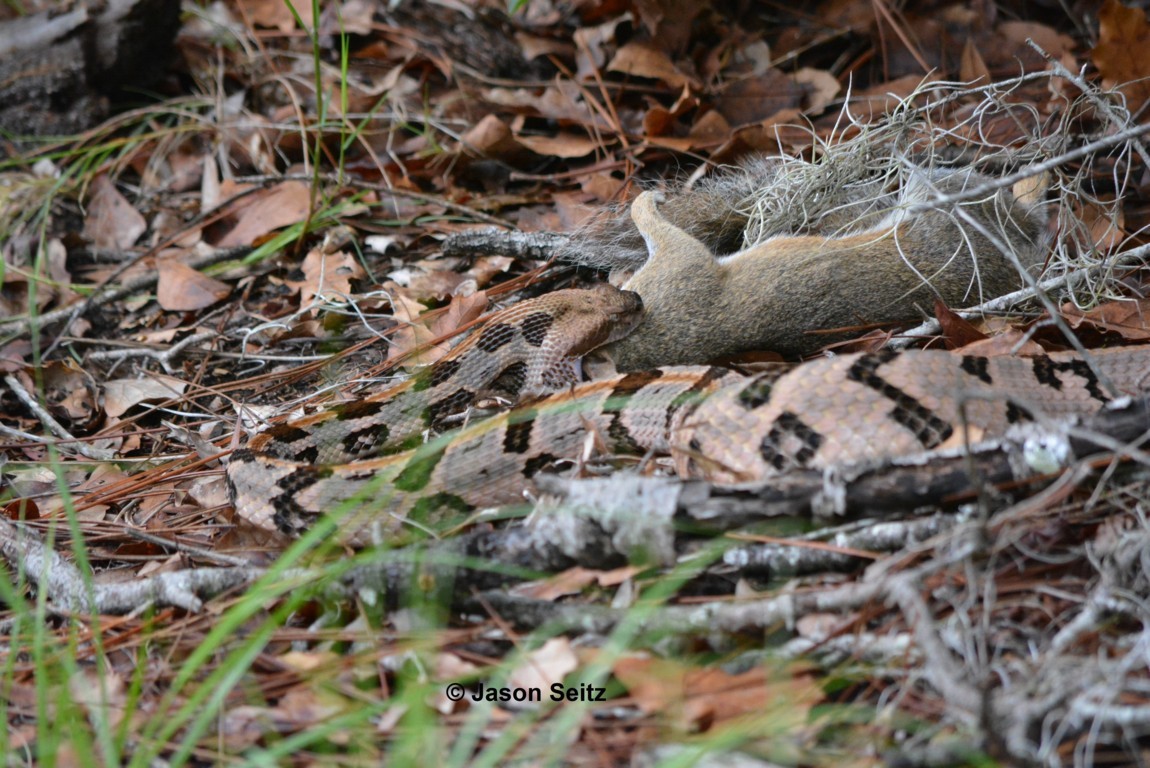 Figure 1.  This timber rattlesnake (Crotalus horridus) was photographed by the author while it consumed an eastern gray squirrel (Sciurus carolinensis) in Alachua County, Florida, after subduing it with venom.  This snake is among the population thought to have a higher concentration of neurotoxic venom than populations north of Interstate 10.

Photographed and copyrighted by the author, Jason Seitz

What Is Rattlesnake Venom Composed of?

The venom of rattlesnakes is a mixture of hemotoxins and neurotoxins, but are mostly hemotoxins.  Hemotoxins target tissues and blood, causing hemorrhaging and necrosis.  Their venom is really a cocktail of chemical elements.  Neurotoxins target the nervous system, some of which can cause paralysis.  While each species of venomous snake has its own particular cocktail of proteins and enzymes compared to other species, there is some evidence to suggest that the relative concentration of neurotoxins to hemotoxins may vary regionally even within a given species of snake.  For instance, a significant percentage of the timber rattlesnakes south of Interstate 10 (I-10) in Florida are believed by some researchers to have a higher concentration of neurotoxic venom than do timber rattlers north of this corridor.  The various proteins and enzymes in rattlesnake venom have a synergistic effect that has evolved to trigger total cardiovascular collapse of the snake’s intended prey.  When a rattler bites in defense, the effects are watered down due to the large size of a person compared to their prey (typically a rodent).

Some recent works by scientists have found that some forms of hemotoxic venoms are not immunogenic, meaning that they do not trigger an immune response by the victim.  They slip by the immune system of the envenomated animal so no antibodies are produced to fight the toxins.  This is troubling since antivenoms are produced by injecting venom into a large animal, typically a horse, and later harvesting the antibodies created by the horse that can be later used to treat bite victims.

Hemotoxin venoms such as those of rattlesnakes begin to disassemble the structural components of blood vessels and tissues as soon as they are injected.  This is done by metalloproteases, which are proteases enzymes that use a metal as a catalyst in the hydrolysis of peptide bonds.  Because these enzymes break down even the proteins responsible for keeping the cell walls of blood vessels intact, localized hemorrhaging results, sending blood into surrounding tissues.  The same metalloproteases also act to break down skeletal muscles.  Another component of rattler toxin, phospholipases cause the death of muscle tissue by attacking their cellular membranes.  Some of these phospholipases have enzymes that create holes in the muscle cell walls by breaking apart the phospholipids that hold the membranes together.  Other phospholipases use as‑yet‑unidentified means of destroying muscle cells.

There are still other enzymes contained within rattler venom that cause destruction.  These include hyaluronidases and serine proteases, each having its own type of destructive mechanism.  Some chemical compounds from the venom travel far from the site of the bite and wreak havoc on blood vessels and skeletal muscles elsewhere in the body.

In addition to the destructive actions of the venom components themselves, some proteins trick our own immune system to fight against our own cells.  Specifically, the actions of metalloproteases and phospholipases trigger an immune response at the site of the wound.  Immune cells such as leukocytes signal an increased immune response by releasing messengers such as interleukin-6.  Since the venom components are not a cohesive force, and with no bacteria to attack, the immune system instead launches an attack that adds to the destruction of our own tissues.  The damage done by our own immune system is doubly troubling considering that antivenom does not help to mitigate its effects.  Studies have found that, when the immune system is shut down, necrotic effects of snake venom are greatly reduced.  The use of Benadryl, for instance, can lessen the swelling and edema associated with envenomation.

A Note on Conservation

Although snakes are often feared and persecuted throughout much of their ranges in the United States and elsewhere, they nonetheless occupy a valuable place in the ecology of many ecosystems.  There are hundreds of species of snakes in the U.S., but only a small portion of them are venomous.  For example, in Florida there are 50 species of snakes but only 6 (12%) of those species are venomous.  Venomous snakes can be safely and effectively avoided by using common sense.  If a snake is thought to be venomous, or if it is not known whether it is venomous, the safe thing to do is to leave it alone.  Remember that most bite victims are bitten because they are attempting to handle or kill the snake.

Snakes perform valuable services such as controlling rodents and other pests.  A recent study has shown that timber rattlesnakes may reduce the incidence of Lyme disease in the northeastern U.S. by preying on the host (rodents) that carries the tick that spreads the disease.  An estimated 2,500 to 4,500 ticks were removed from the northeastern U.S. study areas each year by timber rattlesnakes consuming their mammal hosts.

Recent research suggests that rattlesnakes may help disperse the seeds of grasses and other plants.  Rodents eat grass seeds and those of other plants, but the seeds do not normally survive through the digestive process of rodents.  However, rodents often carry the seeds in their cheek pouches, and if the rodent is then killed and eaten by a rattlesnake, these seeds are capable of passing through the snake’s digestive tract and remaining viable.  Three species of desert-dwelling rattlesnakes were found to have consumed rodents with seeds in their cheek pouches and that the seeds are capable of germinating in the snake’s colon and may be passed with the snake’s feces, allowing dispersal of the plant propagules.

Rattlesnakes and many other species of snakes are experiencing declines in populations in the United States due to loss of habitat, continued persecution, and emerging diseases such as the snake fungus Ophidiomyces ophiodiicola.  The eastern diamondback rattlesnake (Crotalus adamanteus) (Figure 2) has declined to the point where the species has been petitioned for protection as a threatened species under the Endangered Species Act. 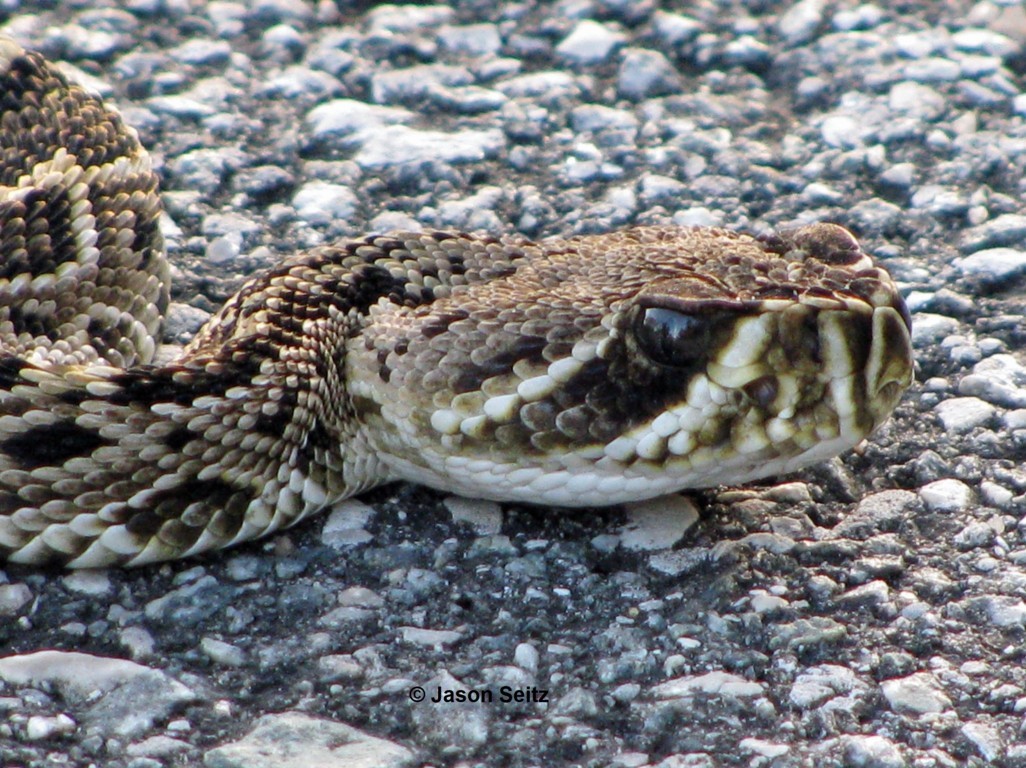 Figure 2.  The eastern diamondback rattlesnake (Crotalus adamanteus) is one of the more well-known (and often persecuted) rattlesnake species.
Photographed and copyrighted by the author, Jason Seitz

Use the HerpMapper mobile phone app to record and submit your amphibian and reptile sightings!  It’s fun, simple, and easy to do.  See the website https://www.herpmapper.org/ for more information and to download the app.

Brown, W.S.  1993.  Biology, Status, and Management of the Timber Rattlesnake (Crotalus horridus): A guide for Conservation.  Society for the Study of Amphibians and Reptiles, Herpetological Circular No. 22, The University of Kansas, Lawrence, KS.

Robertson, M.  2017.  pers. comm. regarding regional differences in neurotoxins in the timber rattlesnake.